The Sunday before Thanksgiving, kids and families got something to be extra thankful for—a brand new Freedom Playground! November 22nd saw the grand opening of the local treasure that had been undergoing renovations (for fun and safety) since last fall. Locals and visitors alike gathered to welcome the new and improved park back to the city.

This, of course, was no easy feat. We’re looking at the steps of the process that helped to make what the Freedom Playground is today.

To understand why (and how) the Freedom Playground underwent such an intense, thorough renovation, it’s important to know a bit about the playground’s beginnings. In 1991, community volunteers gathered to construct the original playground—and it was a great success! In fact, the Freedom Playground is estimated to have been enjoyed by more than 1.5 million children in the years it was open.

Recently, it became apparent that the playground needed some improvements. The original wood construction was not in good condition, and thus posed a safety risk to children. This is why the community decided to come together and work on making the play area safer and more enjoyable for future generations.

To achieve the end result of a playground that was safe and fun for all the community’s children, help had to come from several different sources. A committee was formed, consisting of members including Mimi Hill, chair of the project, and Rick Hall, Director of Parks and Recreation for DeLand. Play by Design, a custom playground design and construction company, was brought on to help as well.

Of course, the playground still needed support in the form of financial contributions and physical hands to help with the construction. The committee held fundraising efforts throughout the community and offered incentives for donations (such as engraved boards for certain donation levels that would form a fence around the playground).

The project didn’t stop there—it even sought the design insights and ideas from local schoolchildren! On Design Day, members of the committee went to local elementary schools to ask students what they wanted to see in the new playground.

Once all was said and done, the Freedom Playground received the help it needed. After raising $325,000 and receiving funding from the city for the rest of the project, the playground was paid for and ready to go.

When it finally came time to unveil the new Freedom Playground to the public, no one could have predicted just how big of a turnout there would be! About 1000 people came to enjoy the new playground—which is interactive, sustainable and handicap-accessible. They also got to listen to live entertainment and enjoy food provided by Free-Wil Barbecue. A local vintage airplane group even honored the opening with a flyover in the sky above the playground.

Even weeks after the opening, the excitement over the Freedom Playground has yet to subside. According to Parks and Recreation Director Hall, whose office overlooks the playground, it was even crowded with happy kids on an early Thursday afternoon!

“It has turned out to be unimaginably wonderful,” Hall said.

There is even more planned to improve the playground experience for families—including a resurfaced parking lot, pavilion and additional landscaping—though the playground itself is ready for enjoyment now. Families from in and out of town are invited to enjoy this new and improved version of DeLand’s favorite playground! 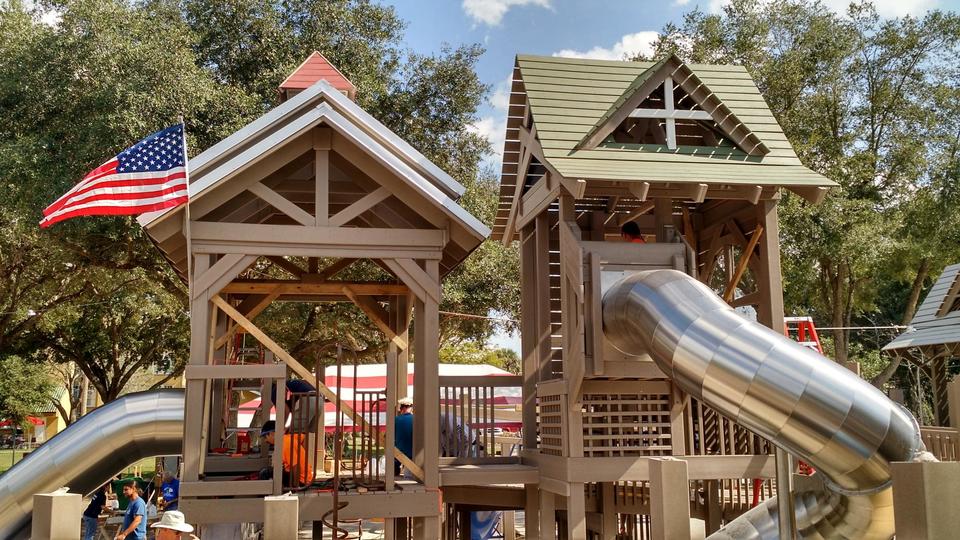